What to Watch in Israeli Democracy: New Government Edition

The New Israel Fund will provide you with regular updates on what you need to know about the most important issues facing Israeli democracy playing out in the 2020 Knesset elections.

NIF does not support or oppose any candidate or political party for election; What to Watch in Israeli Democracy is a look at the big picture and a clear presentation of the most important stories about issues that affect Israelis from all walks of life. 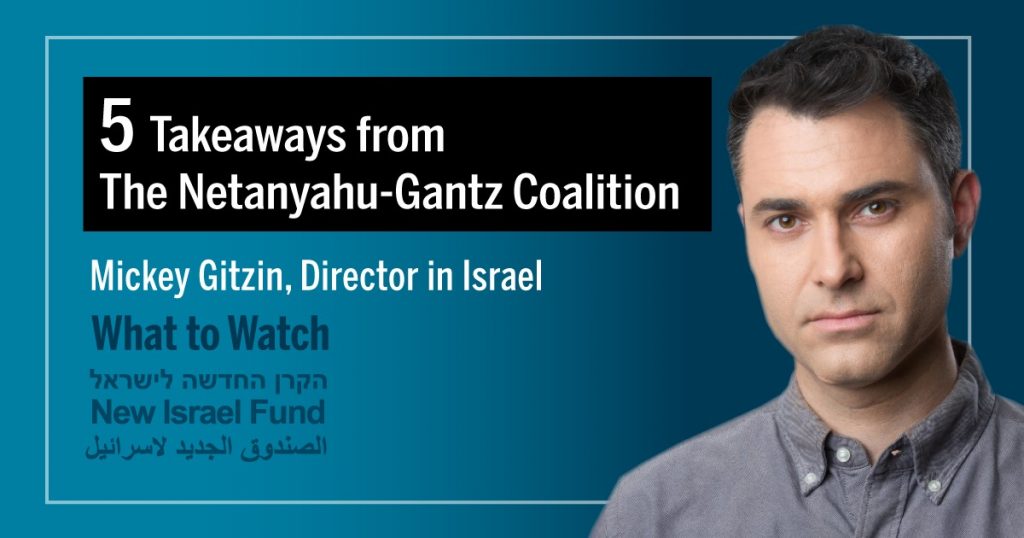 On the eve of Holocaust Memorial Day, Blue and White Chairman Benny Gantz and Prime Minister Benjamin Netanyahu met to sign a coalition agreement that ushers in Netanyahu’s fifth term as Prime Minister. After three rounds of elections over sixteen months, and amidst a global pandemic that has thrust all nations into various states of emergency, Israel will finally have a government.

But the kind of government it will have is one that is unique in the annals of Israel’s history. That government’s defining document — the coalition agreement — has enormous implications for all Israelis and all those who live under its rule.

1. ANNEXATION PUSHED TO THE FOREFRONT

For the next six months, the new government will be defined as an “emergency national government.” By dint of this definition, this government has no power to pass any laws that do not have to do with COVID-19. With one exception: annexation in the West Bank.

Annexing territory in the West Bank is the largest looming threat to Israeli democracy of our time. For the settler enterprise, annexation is the ‘holy grail.’ The coalition agreement sets a start date for the government to begin approving some form of annexation: July 1, 2020. This early date was likely chosen as a carrot to entice far-right parties to join the new government and to ensure that annexation can be carried out while Donald Trump — who’s so-called “peace vision” greenlights unilateral Israeli annexation in the West Bank — is still in office. This emergency government’s “annexation exception” indicates just how central this move will become in the coming months.

It is worth noting that, while a start date for an annexation process is now set down in writing, it is not etched in stone. In the coming weeks and months, we will hear a lot more about annexation from everyone in Israel — politicians, the media, and especially civil society. Civil society is already working with great urgency to slow or stop it.

Because the first six months of this government will decide nothing except COVID-19 response and annexation, it also means that various measures Netanyahu and his previous governments have tried to push through to weaken the power of the judiciary will be put on ice. There will be no legislative attempts to fundamentally shift the balance of powers.

Specifically, Netanyahu’s great threat — that he would legislate an “override clause” that would eliminate judicial review and give the legislature, which in Israel is ruled by the governing majority, lopsided authority — has been sidelined… for now. The override clause would have allowed the Knesset to legislate anti-democratic laws which, even if struck down by the Supreme Court on the basis that they violated human rights or other Basic Laws, would still take effect. Such a law would have effectively eliminated the power of human rights advocates to do their work. But, for now, it’s off the table.

If this coalition agreement is based on one thing it is a lack of trust. If in the past, most coalition agreements included certain shared values and a joint legislative agenda, this one includes none. Instead of the what — legislation, policy and political ideology — it focuses on the who. Specifically, how Gantz and Netanyahu rearranged the very governing structure of Israel in order to accommodate their fragile power-sharing deal: Who will be prime minister, for how long, and what political events can upset their delicate balance?

The coalition agreement strips the opposition of what little power it previously had. Even as the minority (in Israel, the executive – or “the government” – is comprised of the Knesset majority), the opposition is traditionally granted chairmanships of certain committees, but the coalition’s agreement is that the government will hold every last Knesset committee chair. What’s more, previously, one seat on the nine-person Judicial Selection Committee had been held by a member of the opposition. Under this new coalition agreement, however, the opposition will no longer have that seat. They will no longer have a say when it comes to selecting the highest judges in the land — judges who may be asked, in the not too distant future, to sit in judgment of Prime Minister Netanyahu himself.

Finally, the coalition agreement functionally strips the opposition of its ability to dissolve the government. According to the agreement, certain crucial kinds of legislation (a vote of “no confidence” and a vote on the government budget) will require a special majority of 75 members of Knesset to pass. This effectively shuts the opposition out of major parliamentary processes, and all of these parliamentary tools that the opposition had previously used now sit in the hands of the coalition. To analogize to the American system, it is as though the executive — the president and his various departments — were swallowing up many of the powers held by the Senate and the House.

Because some of the questions around who has power may yet be struck down by the Supreme Court, dragging the judiciary into the political arena yet again, it is fair to say that, though it is signed, this coalition agreement does not guarantee this “emergency government” taking office.

4. A MORE MODERATE GOVERNMENT (IN SOME WAYS)

While this government and its formation may present constitutional-level challenges, it is also true that it will, in some ways, be the most moderate government that Israel has seen in many years. There are ministers from Blue and White (as well as the Labor Party who joined them) who understand the fundamentals of a social welfare state – labour rights, housing rights. These are people with whom civil society can finally work. The Ministry of Economy, the Welfare Ministry, the Housing Ministry — all of these will look different, with more equitable policies. The Bedouin Authority, which long languished under the purview of the far-right Jewish Home Party, has been transferred, via this very coalition agreement, to the auspices of the Labor Party.

The coalition agreement also stipulates that the “Kaminitz Law,” a draconian law that raised jail sentences and upped enforcement for building without permits (largely in Arab communities in Israel), will be amended. These developments are good news for Arab citizens, and for all who believe in equality and democracy. That being said, the agreement explicitly states that this government will not amend to the discriminatory Basic Law: Nation-State, breaking a promise Blue and White had made on the campaign trail.

At the end of the day, Netanyahu made certain that he would maintain his status as prime minister — and his power. He won’t be leaving the scene any time soon. (Even as the agreement provides for him to step down as prime minister in eighteen months, to be replaced by Gantz.)

The agreement includes a clause that addresses what had been Netanyahu’s great fear: If the Supreme Court deems him unfit to form a government due to the three criminal charges he faces, the Knesset will automatically dissolve and new elections will be called, effectively annulling the Court’s decision.

Pundits around the world, and especially in Israel, talked about a unified response to the coronavirus is a noble reason for the formation of this emergency government. Netanyahu — who was also effectively granted veto power over the appointment of the next the Attorney General, the same person who reviews his indictments and appeals, had other things in mind – staying out of jail and staying in power. It remains to be seen whether this coalition will pass the scrutiny of the high court, and even if it does if it can outlast this emergency.