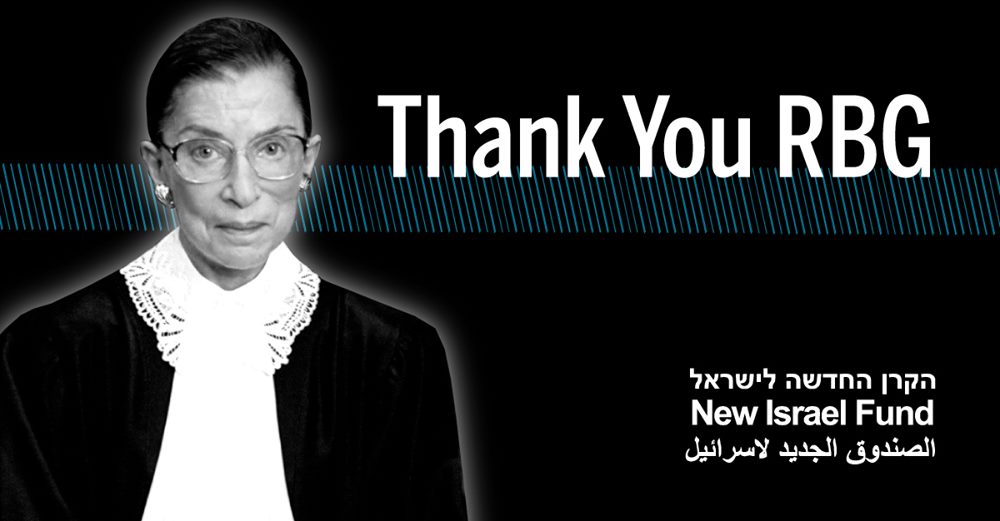 I was deeply moved last night when I heard that just before she passed, Justice Ruth Bader Ginsburg z”l made a special donation to NIF, calling us one of the organisations “that meant the most to her.”

Below I have shared with you the message that NIF CEO Daniel Sokatch sent to supporters in the US. Closer to home, this week it was confirmed in the House of Commons by the Middle East Minster that the UK Embassy in Tel Aviv selected our grantee, Physicians for Human Rights Israel as one of only three organisations to receive special funding to support their Covid-19 response. Specifically, the funding to PHRI supports their work helping asylum seekers in Israel during the pandemic.

I am tremendously proud to be a part of the NIF global network — as one of our supporters, I hope that you are, too.

This year has been an emotional rollercoaster. Over the last 12 months, we have seen so much tumult and heartbreak in Israel, in America, and around the world.

For many of us, one of the saddest moments was learning of the death of Justice Ruth Bader Ginsburg z”l on the eve of Rosh Hashanah. Already bracing from the ups and downs of this coming election, it was hard to contemplate what her death might mean for the values we cherish: equality, fairness, and justice for all.

Then, late last week, we were informed that Justice Ginsburg had been honored by the National Constitution Center, and that she divided the monetary prize “among the institutions and organizations that meant the most to her.” One of those organizations was the New Israel Fund.

“The donation is a meaningful testament to the esteem in which Justice Ginsburg held your work and a tribute to her blessed memory.”

For me, reading the letter was deeply and profoundly moving. The iconic RBG, one of America’s greatest legal minds – the Jewish daughter and granddaughter of immigrants who became the second woman to serve on the US Supreme Court – showed how her values extended far beyond the bench, even beyond the United States, to our work building a better Israel.

Justice Ginsburg’s donation reflects the ideals of a woman that so many, myself included, consider a hero.

We are humbled and inspired by her incredibly touching gesture of support. And we will do our best to honor her memory, her legacy, and her belief in NIF by working, every day, for equality and democracy in Israel.

I can’t help but think of one of Justice Ginsburg’s famous quotes that reflects the way we think and operate here at NIF: “Fight for the things that you care about, but do it in a way that will lead others to join you.”

We will strive to do just that.