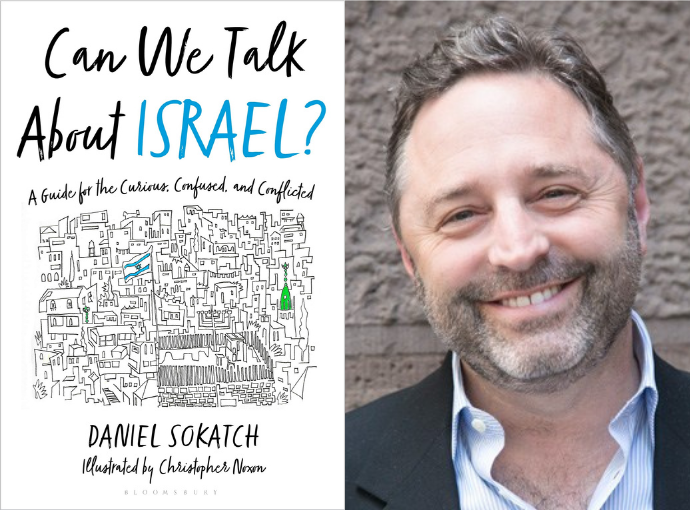 Over the winter break I had the privilege of interviewing our global CEO, Daniel Sokatch, about his book ‘Can we talk about Israel: A guide for the Curious, Confused and Conflicted’ as part of the digital Limmud Festival 2021.

Daniel told me that he wrote the book over lockdown as an explainer – a contemporary guide for the perplexed.  ‘There are a thousand books on Israel: academic books, polemical books, history books, but I felt like there was a real gap in the ‘explainer’ market… I wanted to provide a book that was accessible and clear and let people understand the whole picture.’

His objective for his readers was to be able to hold their own in any Israel ‘dinner party’ conversation.

This is of course, no small feat when the topic is as thorny as contemporary Israel. And Daniel does not shy away from the sharpest and thorniest bushes native to the Israel /Palestine landscape: antisemitism; apartheid (or ‘The other A word’); BDS; Evangelical Christian Zionists.

While the book’s primary audience may be people with a patchier knowledge on Israel than most NIF supporters, there is still much to learn here, particularly as he moves away from Israel’s history and grapples with contemporary issues in the second half.

Can We Talk About Israel is ultimately as enjoyable as it is thought-provoking.

Daniel acknowledges that boycott and divestment has been utilised successfully to confront injustice in many parts of the world. However, BDS ultimate aim is not just to end Israel’s occupation of the Palestinian territories, but ‘calls for the return of Palestinian refugees to their homes’ I.e. their pre-48 homes.

This would effectively create an Arab majority within the State of Israel ‘and the new Arab majority would likely vote to change Israel into a very different kind of country, one that is no longer a Jewish state’.

Daniel treads cautiously here. He states frankly that the answer is ‘complicated’. He admits that anyone spending significant time in the West Bank and seeing first-hand the application of one legal system for Jews and another for Palestinians would ‘have to admit’ that the Israel-Occupied West Bank did resemble some of the more ‘pernicious’ aspects of apartheid-era South Africa.  However, seeing the way that Israel within the Green Line is wrestling ‘to figure out how to be a liberal democracy’ presents a very different picture.

Ultimately, Daniel leans on past NIF President Talia Sasson’s response: ‘It’s bad enough what it is without using complicated and imperfect analogies.’

The largest pro-Israel organisation is not AIPAC or J Street. It is the CUFI – Christian Union for Israel, a key organisation that reportedly influenced the U.S. embassy move from Tel Aviv to Jerusalem. The group as a whole are ‘territorially maximalist’ and their vision is deeply aligned with that of Jewish fundamentalists.

To understand just how influential this group is, look at two potential Republican presidential nominations for 2024: Mike Pompeo and Mike Pence, both of whom strongly align with Christian Zionism. We cannot afford to ignore the influence of this pressure group on Israeli policy.

Join us on March 6 at Jewish Book Week to hear more from Daniel Sokatch in conversation with Anshel Pfeffer on Israel. Tickets for this in-person event at Kings Place are available here.

Thank you for your continued support. 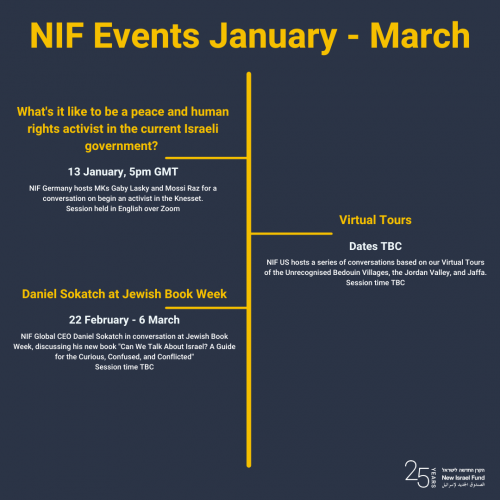