Speaking Out Globally Against Annexation 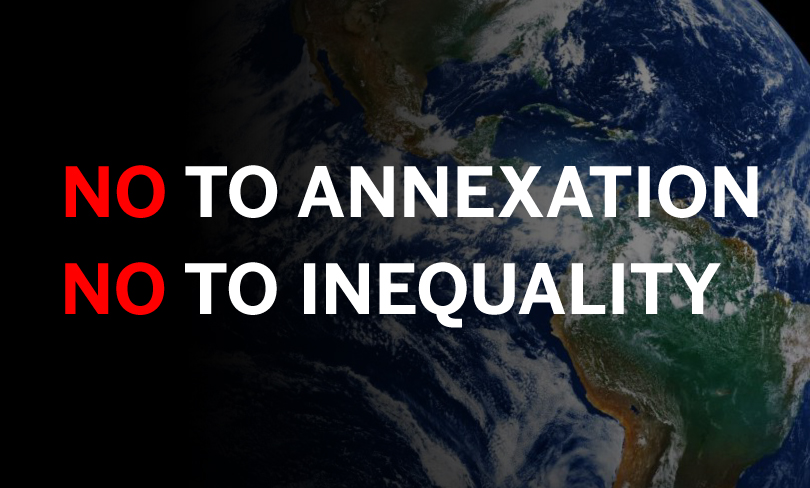 The New Israel Fund around the world — in the UK, Canada, Australia, Israel and the U.S.– is speaking out against the prospect of Israel’s unilateral annexation of parts of the West Bank as a major threat to Palestinian rights and to Israel’s democracy.

On May 18, the New Israel Fund UK sent a letter to Rt Hon James Cleverly, Minister of State for Middle East and North Africa urging Her Majesty’s Government “to continue to oppose any attempts towards unilateral annexation.”

“We are listening carefully to what our grantees in Israel are telling us about the proposal to annex unilaterally territory held by Israel since 1967. Our grantees fear that annexation would make the unequal and discriminatory legal system in the West Bank formal and permanent, irrevocably harming Israel’s democratic character.”

On May 1, NIF Canada sent a letter to the Canadian Foreign Minister François-Philippe Champagne, urging the Canadian government to oppose any attempts towards unilateral annexation.

The letter warned that unilateral annexation “would make the unequal and discriminatory legal system in the West Bank formal and permanent” and it stressed that it is “important for Israel’s allies around the world to send a strong message against annexation and other threats to Israel’s democracy.”

On May 19, the New Israel Fund, NIF Australia, NIF UK, NIF Switzerland, and NIF Germany signed onto a joint letter representing fifty organizations who are part of an international network of progressive Jewish organizations opposing annexation. The letter stated:

“Unilateral annexation is illegal under international law and contravenes all relevant UN Security Council resolutions pertaining to the Israel-Palestine conflict, particularly UNSC Resolution 2334 of Dec. 2016. If implemented, annexation will signify the demise of the two-state solution and will dash any hopes the Palestinian people have of achieving self-determination through nonviolent means.

“Furthermore, annexation could turn Israel into a state that maintains permanent control over millions of Palestinians within its territory — while denying them the most basic civil and political rights — thereby putting an end to democracy in Israel as we know it.”

Read the full letter from the International Progressive Jewish Network:

In the immediate wake of the signing of a coalition agreement between Likud and Blue and White, laying out the terms for the emergency government, NIF’s Director in Israel Mickey Gitzin warned: “Annexing territory in the West Bank is the largest looming threat to Israeli democracy of our time.”

Read: What to Watch in Israeli Democracy: New Government Edition

On May 17, in response to the formation of Israel’s new government, the New Israel Fund joined with seven other members of the Progressive Israel Network in issuing a statement warning against annexation:

“Unilateral annexation would move Israelis and Palestinians towards a bleak future of never-ending conflict. It would make Israel’s unequal and unjust legal system in the West Bank formal and permanent. Instead of upholding the stated commitment of successive Israeli governments to resolve the status of these territories through negotiations, such a decision would say to the world that Israel wishes to systematically confer legal inferiority upon an entire population.”