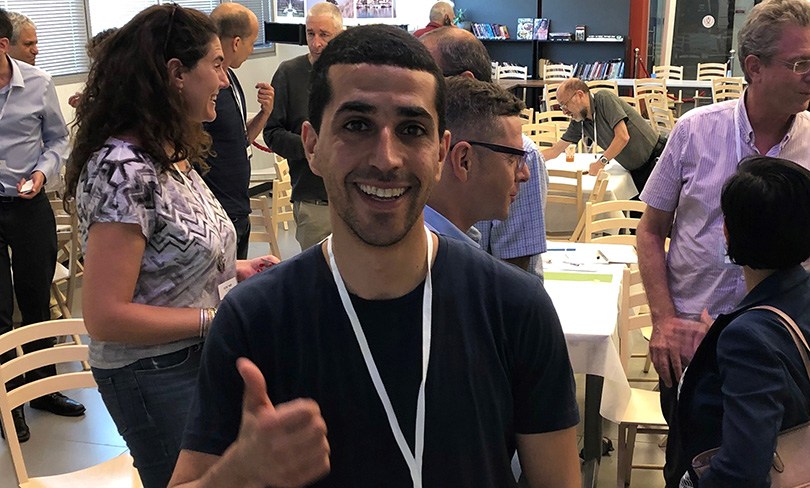 At the age of eight, Hasan Abo-Shally was already fundraising for needy families. He says he has social entrepreneurship in his genes.

“My father, a nurse, started a bakery to provide jobs for unemployed residents of our town of Ar’are, and ran a support group for quitting smoking. My mother, a teacher and guidance counselor, facilitates a women’s group that learns to chant the Koran.” Hasan taught himself software development at a young age, selling his first app while still in high school.

Five years ago, at the age of 22, Hasan and several friends began a voluntary initiative to promote entrepreneurship and technology in the Arab Israeli community, which led to organizing conferences on innovation and entrepreneurship courses for local students. This turned into Hasoub, a successful NGO devoted to enabling Palestinian Israelis to be part of “startup nation.” Hasoub has hosted more than 12,000 participants at over 300 events, making sure they are held at a time and place that enable religious Muslim women to attend.

Recognized by Forbes magazine as one of their “30 under 30” to watch, Hasan also founded Ibtekar, which encourages youth from underprivileged backgrounds to become involved in technological innovation. Today, he directs strategy and innovation at Hasoub and is working towards an MBA at Technion.

On June 25, Hasan was one of 120 participants in Shatil’s Hackathon for Promoting Shared Society, a nine-hour event that took place at the Akko Center for Arts and Technology (A-CAT), a unique educational institution promoting cultural diversity. At the hackathon, Jewish and Arab business people, civil servants, academics, engineers, hi-tech people, artists and activists identified problems, and brainstormed new Jewish-Arab initiatives. By the end of the day, all had made commitments to continue working together under Shatil’s guidance.

Hasan was part of the entrepreneurship team at the hackathon. The team brainstormed 24 ideas and chose to focus on developing a tool that will measure the level of diversity in the area of entrepreneurship – for example, the percentage of Palestinian Israeli students in academic entrepreneurship programs.

“I wish every day could be like the hackathon – all the dialogue and all the activity was very constructive,” Hasan said. “There were obstacles but they showed us how to move through them. And the diversity was amazing – not just Arabs and Jews, but also engineers, hi-tech people, artists – each person brought a different voice.”

Hasoub recently began getting consulting from Shatil. “We’ve only just begun, but I can see working with Shatil is going to be great,” says Hasan.