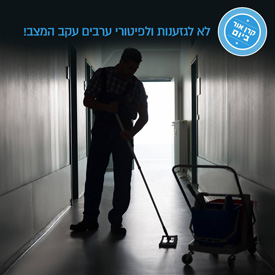 NIF grantee Sikkuy is taking the lead in promoting Jewish-Arab coexistence and preventing discrimination against Palestinian Israelis during this moment of increased conflict. Leading figures from the organisation have been interviewed in newspapers like Calcalist (Hebrew), Haaretz (English), and The Marker (Hebrew) in order to highlight how Palestinian Israelis view the current situation. In addition, they have taken a strong stance on other issues of critical importance now such as the movement opposing boycotts of Arab business and the illegal dismissal of Arab workers by their employers.

In response to the increased public calls to fire Arab employees (and a number of actual dismissals), Sikkuy launched a campaign urging Economy Minister Aryeh Deri to oppose the illegal dismissal of Arabs from their jobs. A number of local authorities have banned Arab workers from schools because of the security situation, while others have limited when they could enter their places of work. A message posted on the Modiin Municipality’s website, for example, said: “The entrance of cleaners to the schools will be after a check by the security guard, with the cleaners to be accompanied throughout the day by school janitors. Entry of cleaning workers to do the daily heavy clean will be from 5 P.M., after the school day is over, and after a check by a security guard.”

In a statement, Sikkuy’s co-executive directors, Rawnak Natour and Ron Gerlitz, said: “Dismissal or worsening employment conditions of Arab workers because of the political situation is wrong and forbidden for a number of reasons. First of all, it’s against the law and violates the workers’ rights. But beyond that, it’s an immoral and anti-educational act taking place in, of all places, schools throughout the country. What kind of message is this meant to convey to young pupils, who are used to seeing Arab workers as part of their usual learning environment and then, during times of tension, they are made to disappear just because they’re Arabs? We must not teach children that every Arab is a threat.”

In addition to these efforts, Sikkuy – along with flagship NIF grantee the Association for Civil Rights in Israel (ACRI) – also sent an urgent appeal to the Attorney- General, and distributed information to Arab workers explaining how to get assistance from the Equal Employment Opportunities Commission in the Ministry of Economy. These efforts have been covered widely in the Israeli media.