In This Establishment, All Are Welcome 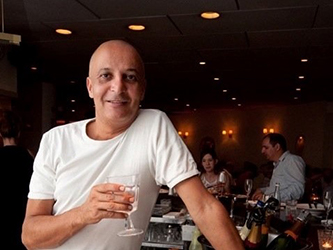 Ilan Garousi, a well-known Jerusalem chef and restauranteur, yearns for the Jerusalem that once was. When he was growing up near the Mahane Yehuda outdoor market, his family’s home was    open to all. They had many Palestinian friends and regularly shopped in Bethlehem. As a teen, he    hung out in cafes in the Old City.

“It was a different time,” says Garousi, an alumnus    of Shatil’s “Lowering the Walls” anti-racism course, which was founded after the sharp rise in racist incidents on the streets of Jerusalem around the 2014 Gaza War. “Everyone in our neighborhood hung out in the big square. The diverse mix of people was magical. That openness in Jerusalem is something that I grew up with and I miss it. Today, there are more walls and fences that separate people.”

So, when a friend told Garousi about Shatil’s training program to help Jerusalemites fight racism, he signed up.

“It was an important and informative year for me,” says Garousi, a father of three sons who served as a commander during the 1982 Lebanon War. “I came into it thinking that I’m against Haredim. They burn IDF uniforms. But in the course, I learned that there are 20 different kinds of Haredim, and I learned to stop generalizing.

“Every week, we hear of another incident in which women are excluded from a public event; my son goes to a bar with my Ethiopian Israeli friends and they are barred from entering; Arab citizens are turned away from a public swimming pool; a cab driver won’t give a blind person a ride. We, who suffered from racism as a people need to do just the opposite – to respect and to accept. Racism exists here and we have to put an end to it.”

That’s exactly what participants and alumni of Lowering the Walls are doing.

“One of the most important things that came out of the course is the connection between the participants,” says Garousi. “We are still in touch, collaborating and helping one another on our initiatives.

“I had this idea of getting Jerusalem businesses to advertise their openness to all with a special sign that they could put in the window. The amazing Shatil staff helped me sharpen the idea and gave me the motivation to do something with it,” he says.

With help and support from the experts at the Greenhouse, Garousi was able to fulfill this old dream: he created “tolerance tags” – signs that could be posted on storefronts – for businesses to welcome customers of all backgrounds and to show their support for equality.

Garousi launched the tag with Jerusalem businesses, including ultra-Orthodox and Arab establishments. Along with 26 Greenhouse participants, he presented the project at the Greenhouse projects launch July 1.

“I’ve been to about 15 businesses to talk about the tag so far – restaurants, cafes, shops, a film school – not one person has turned me down. It was very exciting. People have told me: ‘This is what we think but we didn’t know how to express it.’”

Other initiatives promoting shared society and bringing peoples of all backgrounds together that launched at the Greenhouse include tours of Jerusalem based on personal stories that reflect the city’s diversity, an inclusive, grassroots arts project, and a program that connects Arab and Jewish neighbors.

At the event on July 1, Shatil’s Inda Kriksunov said, “On this date, the 17th of the Tammuz (on the Hebrew calendar), the walls of Jerusalem were breached, and three weeks later, the second Temple was destroyed. It was destroyed because of baseless hatred. That’s what we’re fighting against.”